The Coaching Crew of FC Lampedusa St. Pauli have swapped their tracksuit tops for little black dresses. Half an hour later, the hairdo is perfect too. The makeup conjures some brilliance in our slightly overtired eyes. Months of planning are finally coming to fruition: the result of hundreds of emails exchanged between us and the organisers of the City to City Barcelona FAD Award, and the Foreigners’ Registration Office. A heap of paperwork had to be completed in order to make it possible for 11 of our players to make this journey with us. In addition, just two days before departure, there were frantic negotiations with the airline – in a sudden attempt to thwart our plans in the eleventh hour they were refusing to accept the papers of some of our players. However, after fantastic teamwork with our hosts, the City of Barcelona and the FC Barcelona, the airline eventually confirmed that FCLSP could travel with all our registered players. This confirmation coming just 15 hours before we were due to fly.

Never did we expect that an airline would doubt travel-documents that were issued in Germany. You never stop learning. On top of this, two of the young players, we would also have liked to take with us to Barcelona, were forced to leave Germany during the application process. That alone was bad enough.

The players were freshening up too, and we looked forward to seeing which of them would win the “shirt of the day contest” – one of our favourite competitions at FCLSP.

In five minutes time, our fantastic hosts would pick us up at the hostel’s reception and bring us to the presentation of the City to City Barcelona FAD Award 2016, the actual reason of this trip.

“Bing! Bing!” – a WhatsApp message comes in. It is from one of our FCLSP players who had an appointment with the foreigners’ registration office in Hamburg earlier this morning. He hadn’t got in touch with us all day and we were already worrying that the reason for his silence was him having switched off all his phone in sorrow, after being  ‘asked’ to leave Germany within one week.

Reading the first sentence on the lock screen already did enough to bring us back to the harsh reality:

“…it’s not a good situation, I’m in a closed camp right now near the airport. I have to stay here till 2/12/16 and then they will deport me…“

We try hard not to burst into tears and to keep calm. There’s no time for a second makeup session.

Why now, during our stay in Barcelona? Why did he not get another extension? He already had to be at the foreigners’ registration office every Monday anyway, getting his short-term permit extended for another week? Why does it seem to be unwanted that FCLSP can properly bid farewell to its players?

Why is the new “Deportation Custody Facility”, which the City of Hamburg operates at the airport, filled with our midfielder while we are here – in the limelight – being presented an award for “outstanding project work”? Why do deportations take place on a home match day of FC St. Pauli?

And why on earth is our habibi locked up in this new facility as only the fifth person ever to have been detained there? ALONE, apart from twenty around-the-clock present employees of above mentioned office and a security service, while we are in Barcelona, feeling like we are being carried on hands, because our project made it to the final three of the City to City Barcelona FAD Award 2016 competition, out of the 100 entries submitted?

What on earth is wrong with our world?

At least, the memories we share with this player reeling in our mind’s eye prevent us from sinking into a sea of tears. You grow with your tasks, as the German phrase goes. But it is still so unfair!

Of course, we knew right from the start of this project that this sort of pain would be involved, but still Hamburg’s Ministry of the Interior, Youth and Sport somehow manages to ever produce new variations of an ugly face. The more arbitrarily the deportations are scheduled, the more brazen the methods get. But sitting there wailing has never helped anyone.

We do not want to be just another set of “do-gooders” providing only help. However, we can only achieve integration within structures which allow us to do it. The mere fact that Hamburg’s Ministry of the Interior, Youth and Sport is ONE municipal authority speaks for itself. Maybe it is even the reason why our habibi, in his first reception container camp, got a room with a view of the FCSP training facilities? Sometimes, when nothing else helps, it is cynicism that can still make us laugh.

We do what we always do in situations like this: we keep calm. A short phone call with the solicitor and the fiancée of our midfielder and then we have to leave for the awards ceremony.

The players notice that something isn’t okay. Some ask us, others do not. We do not want to spoil the first and – perhaps – only holiday of their lives. Their anxieties and sorrows left in Hamburg for a couple of days will be with them again on their return. The players shall enjoy themselves during their stay and forget their problems for a while.

The absurdity gradually sinks in. For three years now, you’ve given your all to a project which has become internationally renowned, wins awards… and then you’re brought back to reality in such a terrible way. Over the last three days, we were having so much fun; had so many wonderful people around us; shared great conversations and experienced very positive press coverage of our trip.

And the City of Hamburg? Puts one of our players, all alone, into a jail which they don’t even want to call a jail and fabricate disgusting terms like “departure custody” for such thing? In particular at a time, when we are out of town for a couple of days? One of our habibis?

A guy to become only the fifth person to be put into the new deportation jail at Hamburg Airport.

The reel keeps running in our mind’s eye.

In front of Barcelona City Hall, Christmas decorations sparkle. The timetable is tight. No time for a cool down cigarette or another make up check. The waterproof mascara fortunately stands the single tears. In the outer office of Mayor Ada Colau all the winners and award presenters are gathering. Everybody approaches us: “What a great project”, “So good to have you here”.

Actually, we should be grateful and happy in this very moment. However, we do not really feel like celebrating. We try to hide that feeling. But why should we keep the situation a secret? Jordi Cardoner, vice-chairman of the FC Barcelona Foundation, is the first to face reality. Everyone shakes their heads in disbelief. And so it remains for the rest of the night.

The door opens and Ada Colau comes in. A short reception and then it gets started. We try to focus on our address and go over our speech again, word by word. Our gratefulness for the award and the invitation shall, at the end of the day, be shown appropriately. One of us gives the address in Catalan for two minutes and the other then proceeds in English. Distraction therapy, given the events of the day.

We manage to do it with aplomb. The following marathon of handshakes, taking photos and talks to the press does us good, because it shows that we apparently do something right.

In any case, we continue to pose for photos. “Tell us when you need something”, is one of the central sentences of the night, no matter who we talk to. This does us good, warms our hearts and recharges our batteries for the coming months. Back in Hamburg, we will definitely need 100% recharged batteries.

“We would love to clone your mayor, Ada Colau, and take her with us to Hamburg,” we reply. Usually, we’re at our funniest when things are at their worst, because we know that we mean it.

And then, we go outside for a cigarette and to call the jail – of which it is said not to be a jail, because it has free WiFi…  // Gastartikel von FC Lampedusa Hamburg 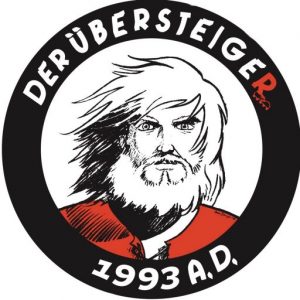